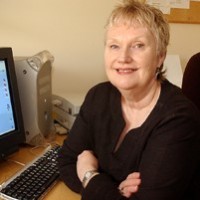 A retired news editor has graduated from university a first class honours degree at the age of 75.

Carole Taylor has achieved a BA in Religion, Philosophy and Ethics after studying at the University of Gloucestershire.

Carole, pictured, worked as a reporter and sub-editor on numerous Gloucestershire newspapers, later serving as news editor on the Stroud News & Journal and the Gazette series.

The grandmother-of-twelve left school at 16 with three GCEs to take an apprenticeship as a trainee reporter with the Worthing Gazette.

Carole told the News & Journal: “I always wished I had gone to university, but I thought my lack of qualifications made it impossible. However, after retiring, I decided to give it a try.

“I was inspired by my youngest son James, who became a mature student and trained as a teacher.

“To my surprise, lack of qualifications such as A-Levels was not a barrier for an ‘extra mature’ student like me, and I started my studies at the University of Gloucestershire in 2016.

“Having been out of education for so long, I started off on a part-time basis, but as my confidence grew, I changed to full-time study. It was a wonderful experience.”

Carole now hopes to start a Masters in September.

Her son James said: “I am extremely proud of my mum, she has worked so hard to achieve this.

“I think her achievement shows that anyone can learn new things at any point in their life.

“She is a brilliant example.”