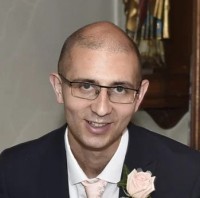 A journalist has opened up on a seven-year battle with chronic pain that forced him to take medical leave from a weekly newspaper.

Peterborough Telegraph reporter Joel Lamy says his career ambitions have been “dashed” by his seven-year battle with pain so bad it affects activities like typing, eating, walking and wearing clothes.

The condition began as a weakness in his left leg but has now escalated to the extent whereby most of Joel’s body “lights up in neuropathic pain from the merest contact”.

Joel, pictured, has described in detail his “hellish journey” in a post on his personal blog.

He wrote: “Throughout all of these struggles I have managed to work a full time job, sometimes doing up to 60 hours a week. I found the adrenaline of working kept me occupied, even if the comedowns were brutal.

“That was until recently, where my body finally packed in. Even though my working hours had reduced, I could not cope any longer. I am now on medical leave.

“It’s incredible to think that this all started innocuously, with a random pain suddenly developing while I was sitting in my flat in London. There was nothing I can remember which triggered it.

“The hardest part is seeing my career dreams dashed, others living the life I wanted and friends and family not having a clue about my condition and why a slight bump to my head could see me shaking uncontrollably in pain for hours.

“I believe I finally have some answers now. Chronic pain can be triggered without obvious cause – for instance, you can recover from an injury but the pain signals in your brain remain switched on, even though physically there is nothing wrong with you.

“Over time this gets worse, as all positive feelings become distant memories, and the pain spreads and intensifies. The feelings of despair and loneliness and not understanding why I was in agony when so many scans showed nothing have only made things so much harder.”

“I have had to accept that there is no magic cure, that these treatments at best will mean I may be able to manage the pain and live a better life, one which means I’m not scared of eating because the motion of chewing can trigger a surge in pain.

“Now, I carry on with scary thoughts of what the future holds for a family life, work and any pain relief. I am in the prime years of my life but feel far older.”

Joel concluded: “I still have so many things which can spark passion in me – I long to find enough energy to return to work, to highlight injustices and campaign against them and to make a difference in the world.

“Money does not motivate me (otherwise why become a journalist), but a feeling that I can make a difference. There are so many wrongs out there that need to be exposed.

“But right now I want to remember what it’s like to laugh, and to do so without hurting myself. I’ve never been a fun person, but now I’m just misery to be around.

“Even if this doesn’t reach anyone who can relate to this, I feel writing about it has lifted a bit of the mental burden which has driven me to despair and left me feeling completely hopeless.”

Since going public on his situation, Joel has received dozens of messages of support.

Posting on Twitter, his editor Mark Edwards wrote: “This breaks my heart, but it’s time to focus everything on getting well.

“Those who know Joel will know this is not about sympathy – he’s one of the most talented, self-effacing and tenacious people I’ve met – but about promoting understanding. Keep going mate.”

Darragh MacAnthony, owner of Peterborough United Football Club, added: “Joel, what you are going through sounds absolutely terrifying on all counts. The honesty in that piece you wrote is awe-inspiring.”

Joel told HTFP: “I only published the blog as I was at home feeling despondent at having to go off work. I’m normally a private person but I felt like it would help me mentally putting everything out there.

“I only expected a few people to read it so I was shocked to see loads of tweets and Facebook comments including from people I hadn’t spoken to in years.

“The positive reaction to the blog has given me a boost as I try to recover, but the best thing has been hearing from other sufferers who said what I had written struck a chord with them and made them feel better, while their stories have given me some hope that I may improve one day.”

Other journalists to speak out publicly about their battles with chronic medical conditions in recent years include Tyler Mears, of Wales Online, and Hull Live digital editor Jenna Thompson.