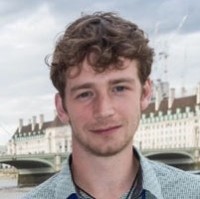 A regional journalist was attacked by far-right activists while covering a protest on his patch.

Leeds Live reporter Ben Abbiss says he was threatened by a group of counter-demonstrators opposing a Black Lives Matter protest he was reporting on in the city.

Ben, pictured, was “hounded out” and given a police escort after being accused of being a member of anti-fascist organisation Antifa by a group of protesters.

The group poured beer on him and threatened to kick him down some steps in Millennium Square, Leeds.

Ben described Saturday’s incident, in which he says took place after he took a photograph, in a piece for Leeds Live.

He wrote: “As I took it I got soaked with beer from behind, three of them came up to me accusing me of being Antifa, when I showed them my journo ID they threatened to kick me down the stairs.

“Walked to police with around 20 coming after me chanting Antifa and scum.

“Then I was escorted out by police.”

Ben is not the first Leeds Live journalist to face threats for covering a far-right protest.

HTFP reported last year how Susie Beever, who has since moved to the Yorkshire Post, received a threat in which she was told she would pay “the ultimate price” for covering such a rally for the website.

Editors across the country have spoken out in recent days on online abuse and comments being made by readers in relation to their coverage of the BLM protests.

Those speaking out include Edd Moore, of Plymouth Live, Katie French, of the Basingstoke Gazette, Pete Gavan, of the Swindon Advertiser, Martin Tideswell and Mary-Ann Astle, of Stoke daily The Sentinel and Stoke-on-Trent Live, and Helen Dalby, of Reach plc North-East.