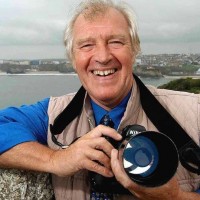 A regional press photographer who also served as a coastguard on his patch has died aged 80.

Tributes have been paid to Bernard White, pictured, who spent 34 years with the Cornish Guardian.

During his time with the Guardian, Bernard, known to colleagues as Bernie, was also a member of HM Coastguard Search and Rescue team for 19 years.

He retired from photography in 2008 due to illness.

His widow Joan told Cornwall Live: “Bernard liked it all when it came to photography. One time, at the Royal Cornwall Show, Princess Margaret was being presented a big bull. The bull went on its side.

“Bernard, who knew a bit about cattle, positioned himself in a way that, when the bull came up on one knee, it looked like it was kneeling in front of Princess Margaret. He was the only who got that shot that day.

“On another occasion there was this big road traffic collision near Bodmin.

“The chief inspector at the scene said he didn’t want the road cleared up until Bernard turned up. That’s how well respected he was.”

Bernie, who is survived by Joan, three children and eight grandchildren, left school at the age of 15, later going to work at a garage while studying engineering at Oldham Technical College.

In 1965 Bernie and Joan relocated to Newquay where they worked in a small guest house for eight years. He later ran his own garage and worked as a coach driver before embarking on his press career.

Mike Jarvis, former news editor at the Guardian, said: “I had the pleasure of working alongside Bernie for several years, reporting for the Newquay edition of the paper. It was easily some of the most memorable and enjoyable times I can remember as a journalist.

“Bernie was the life and soul of the office, always cracking jokes and always with a smile on his face. But, above all, he was a consummate professional and wanted to do the very best job he could for the paper and the people he was photographing.

“We always used to joke that nothing seemed to happen in Newquay without Bernie knowing about it, and most of the time that was true.

“His local knowledge was immense. He was a great photographer and was liked by everyone who knew him. There’s no doubt he will be sadly missed.”