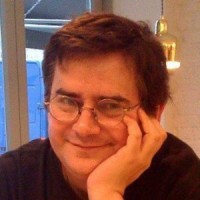 A former regional journalist who went on to become well-known in the music press has died aged 60.

Tributes have been paid to Mark Beech, who worked for titles including the Banbury Guardian and now-defunct Birmingham Daily News.

Mark, pictured, later went on to work for Bloomberg for many years, serving as its chief rock music critic.

He also wrote for Forbes magazine as a contributor and most recently was editor of Dante magazine, according to an obituary by Talking Biz News.

Former Guardian editor David Scott told HTFP: “He worked for me when I edited the Banbury Guardian and then was part of the launch team for the Birmingham Daily News in 1984.

“He was a very popular member of the team. The sort of guy everybody got on with.”

Posting on Twitter, Bloomberg business journalist Alex Webb added: “What a great loss. Mark Beech was a tremendous guy and a terrific journalist.”