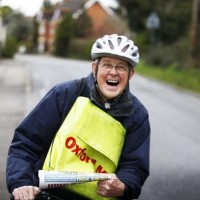 A regional daily has paid tribute to its oldest “paper boy” – still delivering at the age of 84.

The Oxford Mail has thanked Alan Gillard for his continued service after 24 years in the role.

Mr Gillard, pictured, took over the paper round from his son after he got a job working in computing.

His round is spread across the eastern side of his home town of Thame, where he delivers 21 copies of the Mail by car and bicycle.

He told the Mail: “My son started doing a paper round when he was at college but when he got a part-time job, I would help out when he couldn’t do it.

“Then when he got a permanent job, I took over the round and have been doing it since.  I’ve got permission from the doctors to be out and I’m on my bike so I’m not a risk.”

Mail editor Samantha Harman posted on Twitter: “Eighty-four years young and loving life.  And yes he has got his doctor’s permission to be out doing his rounds.

“He is providing a vital service to the isolated. Thank you, Alan.”