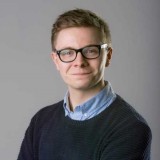 “Toxic behaviour” from readers has sparked a “crisis” for sports journalists facing abuse in their work, a director at a regional publisher has said.

Jon Birchall, sport audience and content director at Reach plc, has warned editors the level of abuse being aimed at journalists working on the company’s sportsdesks has now reached an “unprecedented level”.

His warning was issued during a debate on the subject of ‘Mental Health in the Newsroom’, held as part of this year’s Society of Editors Virtual Conference – with Jon noting that sports reporters who were women, gay or from ethnic minority backgrounds were most likely to be targeted.

Jon, pictured, told the discussion this evening of his own struggles with mental health issues and said he had suffered his most recent episode in September after taking up his current role.

He added: “Our challenges are different [from other journalists] but with a team of 150 journalists on sportdesks, they’re certainly no less evasive when it comes to mental health.

“Unfortunately sports media is still shamefully behind other areas of the industry when it comes to diversity, particularly gender diversity, and as such I work with far more men than women – which is a separate but equally important cultural issue that we need to challenge.

“The reason I say this, and the reason it matters, is because Mental Health Foundation research shows that men are far less likely to talk about their mental health with somebody they know or seek medical attention for mental health problems.

“In addition, I believe we’re facing a crisis when it comes to toxic behaviour towards sports journalists – and all journalists – on social media, where sadly the tribal nature of sport has led to an unprecedented level of abuse online.

“Particularly, and predictably sadly, this is often more frequent when it comes to sports journalists who are women, who are openly gay or who are from a minority ethnic background. I know that these are issues that exist beyond sport as well.”

Jon’s points were backed up by Steve Wollaston, Reach’s deputy football editor in the Midlands.

In a text discussion held alongside the virtual debate, Steve wrote: “Sport is indeed an intense environment and lockdown has shone a real light on the pressures for young and senior staff in our department.

“Jon Birchall has been brilliant at encouraging us all to listen very carefully and keep talking to our staff.

“It’s certainly a much bigger issue than I have faced before in 20 years.”

Research was also presented during the debate by freelance editor and consultant John Crowley, who found 94pc of journalists he had questioned expected newsrooms to change after the coronavirus crisis.

In a warning to editors, John told the conference: “Staff on the shop floor really feel this is the moment newsrooms will change.

“Rank and file journalists want to be consulted about how these newsrooms will change.”