Regional political editors say readers have been “particularly kind” to them amid struggles with government communications during the coronavirus crisis.

Leicester Mercury politics correspondent Dan Martin and Birmingham Mail people and politics editor Jane Haynes have both shared their views on the “chaotic” way Westminster has dealt with the regional press during the pandemic.

Dan and Jane discussed the subject in a panel debate entitled ‘Lockdown lessons from Leicester and beyond’, held as part of this year’s Society of Editors Virtual Conference.

Dan told the debate yesterday evening of the struggles the Mercury had faced in covering localised restrictions in Leicester. 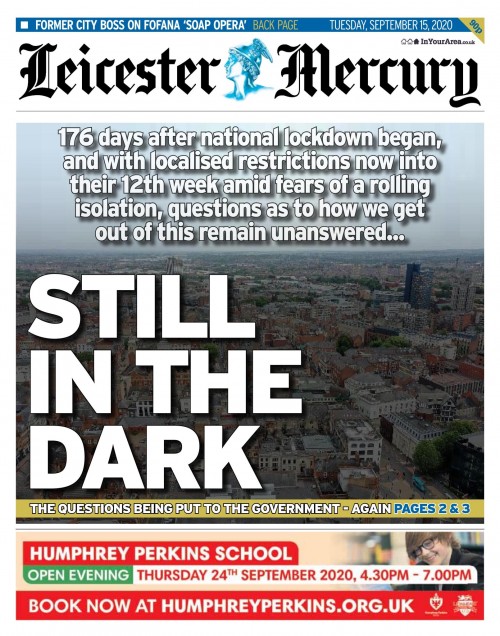 HTFP reported in September how the newspaper had criticised Health Secretary Matt Hancock on its front page, pictured above, over his lack of availability for interview.

Dan told the conference: “If you’re being generous, you might call it chaotic, I think, in terms of the way the government communicated because we have found ourselves at so many stages in this trying to pin down important announcements from MPs’ tweets and things like.

“There’s a drip, drip, drip of information – stuff that people need to know immediately and they come to us for it – and it’s been really, really tough.

“I don’t want to blow our own trumpet but I think we’ve done a fairly good job of it and we’ve noticed readers have been particularly kind with a lot of our coverage, especially bringing crucial information to them quickly.”

But Dan also went on to express some sympathy with government press officers he had dealt with during the pandemic.

He added: “I don’t want to go too easy on government press officers, but I just think they were struggling with it as well because this government – we know now if we didn’t before – what it does is government by front page.

“We’re likely to find out important things from the front page of The times or the Telegraph particularly.”

Jane told the debate: “What this government has failed to do abjectly is involve the regions and the regional media pretty much in every step on its journey through this pandemic.”

She added: “We’ve all made mistakes and the government has certainly made them, but I think when I see that repeat over and over it starts to feel like a strategy rather than something that’s been forced on them.”