Sports journalists have bid a temporary farewell to readers after being furloughed due to a regional publisher’s decision to scale back coverage.

Reach plc editorial staff have begun revealing they have been placed on the coronavirus job retention scheme which will see the government fund up to 80pc of wages.

Reach announced yesterday it was putting a fifth of its 4,700-strong workforce on paid leave and reducing pay of all staff by a minimum of 10pc, in line with similar measures adopted by a number of other regional press groups.

The company has so far declined to reveal the number of editorial staff placed on the scheme, or what positions they hold, but some of the group’s editors have begun to reveal how the changes will affect their operations. 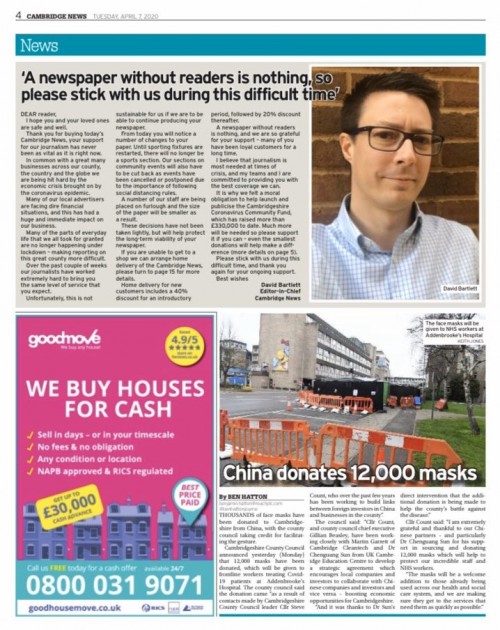 In a message to readers, pictured above, Cambridge News editor David Bartlett revealed the newspaper would no longer carry a sports section until sporting fixtures are restarted, while its community events section will also be cut back.

David wrote: “A number of our staff are being placed on furlough and the size of the paper will be smaller as a result. These decisions have not been taken lightly, but will help protect the long-term viability of your newspaper.”

The News and its sister website Cambridgeshire Live have so far helped to raise more than £330,000 for a coronavirus community fund in the county.

David added: “I believe that journalism is most needed at times of crisis, and my teams and I are committed to providing you with the best coverage we can.”

Rachael wrote: “They will be sorely missed by their contacts and their readers and we will do our best to hold the fort for their patches until they are back at their desks.

“These have not been easy decisions to make – we and they know we are doing everything we can to safeguard the future of the wider business and local journalism in Gloucestershire.”

Steve wrote: “I have been placed on furlough leave so there will be no Derby County coverage from me for now.”

James said: “I am on furlough for three weeks as of today. I’ll continue to tweet about SAFC now and then, but won’t be writing any new stories. I’ll be back working again on 28 April. Tough times, but there are lots of people in far worse situations than me. Take care.”

And Leigh added: “Just to let readers know I have been placed on furlough this morning so there will be no Notts coverage from me. It’s an incredibly difficult time for the country so totally get it. Hope to be back when life returns to some normality. Just hope the lawnmower doesn’t break.”

Reach has also confirmed its annual general meeting will go ahead on 7 May, but has told shareholders not to attend and vote by proxy in line with the government’s ‘stay at home’ guidance.

The centre of the paper is devoted to a picture of a rainbow for children to stick in their windows as a symbol of hope during the pandemic.

After a suggestion from a reader this double-page ‘rainbow special’ will be printed in the centre pages of tomorrow’s paper so kids can stick it in their windows! ? pic.twitter.com/R4DnfpN9Vg

Belfast Telegraph owner Independent News & Media has announced it is to introduce reduced hours and temporary lay-offs for some of its commercial staff and will cut pay for senior management.

Around 90 staff working in INM’s commercial teams across the island of Ireland will be directly affected by the decision.

Most of those affected by the cost cutting plan will continue to be paid 90pc of their monthly salary, with lower paid workers kept on full pay for the period, which is expected to last 10 weeks.