A regional publisher’s investigation has revealed “shocking” findings on the number of children being excluded from school for violence, drugs and alcohol issues.

Newsquest titles across the country have covered the results of the probe by the company’s data unit, which sees selected reporters from across the UK work for one day a week on data-related stories.

The unit was launched last year with the aim of generating a “dedicated potential splash” for the company’s editors each week, and is headed by former BBC shared data unit secondees Vicky Gayle, Joanna Morris and Bev Holder.

The school exclusions investigation was led by Federica Bedendo, a senior reporter working for the company’s titles in Cumbria. 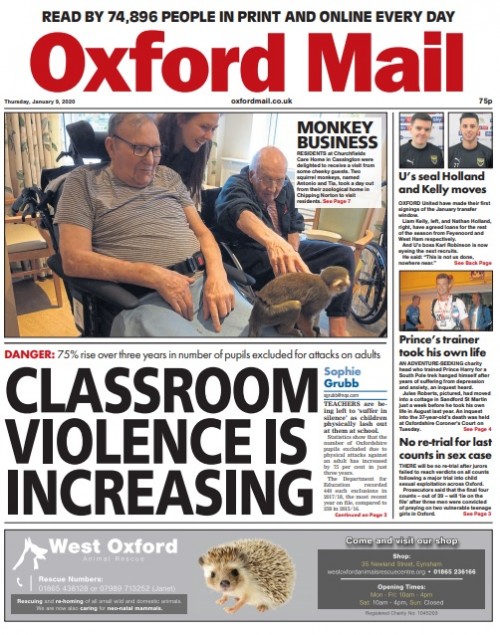 Localised findings provided a splash for the Oxford Mail

Federica told HTFP: “Education is always a big talking point with our readers and when I spotted there was some open data on school exclusions, I knew I had to pursue it.

“The figures showed the number of children being excluded for a variety of reasons and I was quite shocked at the number of pupils excluded due to violence or drug and alcohol issues.

“Everyone knows that it is common for children to experiment with substances, but for it to become such an issue that it warrants exclusions, was quite shocking to discover.

“I was very keen not to demonise the pupils, instead looking at the issue more widely and finding out why exclusions were deemed the best option by schools and what effect this behaviour has on teachers and the wider community.

“It was great to see the story being used so widely by my colleagues and to see each publication finding a different angle on it. People often think of data journalism as something very scientific, but I guess stories like this one show there are humans behind the stats.”