A regional publisher has launched new subscription packages aimed specifically at readers of its sports coverage.

JPIMedia has unveiled the new ‘digital season pass’ packages on four of its websites – the Yorkshire Evening Post, Sunderland Echo, Portsmouth daily The News and Sheffield daily The Star – to coincide with the start of the new football season.

The deal allows readers unlimited access to the titles’ sports content, as well as an additional five non-sports articles each week, for a £39.95 annual subscription.

A premium sports package, which includes a mobile app, is priced at £49.95 per annum. 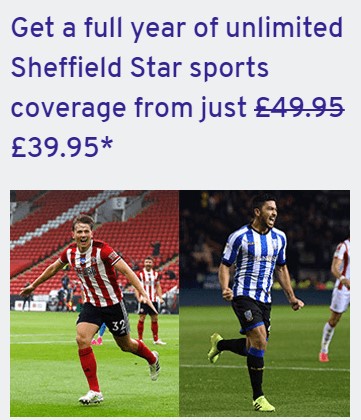 Readers signing up after 5 October will pay £49.95 and £59.95 for the standard and premium sports packages respectively.

At present, full and unlimited access to all content on the sites costs £79.90 if a standard annual subscription is taken out.

Posting on Twitter, JPIMedia head of football Ross Gregory said: “The return of the football season has seen JPIMedia launch new digital season passes on four of our titles, and the initial take-up has been fantastic.

“Shows how much readers value strong, trusted local journalism and in-depth coverage of their clubs.”

Speaking to HTFP, Ross added: “The launch of a sports package is an exciting development of JPI’s subscription model. With the season restarting in England, we wanted to give football fans an offering that suits their digital needs a bit more.

“We appreciate not everyone wants to read all of the sections on our websites, and sport has the most loyal readership on some of our titles, with readers continually coming back to us to consume more of our content, which we wanted to recognise with these packages.

“They give readers full access to the wide range of breaking news, features, investigations, live matchday coverage, podcasts and videos that the teams produce.

“The early signs have been really encouraging. There’s been a great response from readers which clearly shows how much they value dedicated and trusted journalism around the clubs they support.

“The four titles we’ve launched the package on, the YEP, Sheffield Star, Sunderland Echo and Portsmouth News, have all provided impartial and comprehensive coverage of the clubs in their cities for more than a century, and will strive to keep giving readers the sports coverage that they want in a way that they want for a long time to come.”

Earlier this year JPIMedia launched metered paywalls across a number of its websites after experiencing a “rapid growth in digital subscriptions” at its titles which already operated them.

Nigel Leigh, chief digital officer at JPIMedia, told HTFP: “Since launching our metered digital subscriptions we have learnt much about the content that engages our readers and listened to their requests.

“As such we recently launched a sports package across four of our titles and will continue to evolve the subscription proposition across all 13 titles to meet the needs of our readers.”