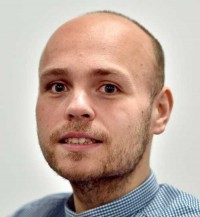 Football fans are being urged to help a regional publisher choose 2020’s best player in a new awards scheme.

Reach plc has launched its inaugural Premier League Fans’ Footballer of the Year awards to celebrate the very best of England’s top flight.

Fans of each Premier League club can also vote for their team’s top player.

Reach’s regional sport podcasts Blood Red, Royal Blue, Everything Is Black & White, Manchester Is Red, Talking City and Claret & Blue will all be covering the awards with dedicated content in the run-up to the winners being announced.

Kristian Walsh, pictured, head of audience engagement at Reach Sports, said: “The year of 2020 isn’t one we will forget in a hurry, including from a sporting perspective.

“Our journalists have been there every step of the way to inform and entertain fans up and down the country during the pandemic.

“Now we are combining our journalists and fans together, giving supporters a voice so they can crown their best footballers of the year.”

Jon Birchall, audience and content director for Reach Sports added: “Our Fans’ Footballer of the Year Awards is a true multi-platform experience which puts the power back in the hands of the people who really matter – the supporters.

“In a tough year for fans, it is only right that they get to choose who deserves the prize.”