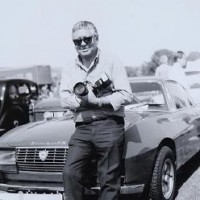 A press photographer who was on first name terms with the late Queen Mother has died aged 77.

Tributes have been paid to Ian Jolly, pictured, who worked mostly in the Highlands and Islands of Scotland.

Former employers include the Daily Record, where he worked for the Glasgow-based newspaper’s former Inverness branch office.

In a tribute for the National Union of Journalists, Bill Mowat described Ian as “the best-known press photographer in the Northern half of Scotland” for several decades.

Bill added: “So well-known was he that even HM Queen Elizabeth, the late Queen Mother, whom he snapped on many dozens of occasions when she was on summer outings from her holiday homes at Castle of Mey in Caithness and Birkhall on Royal Deeside, used his first name to address him.”

Ian was married To Maureen, with whom he had children Caroline and Peter.

Peter worked for his father at Northpix, the freelance photo agency that Ian established after the Record’s Inverness office was shut in 1989.

Ian died of cancer before Christmas, and his funeral was held at Inverness Crematorium on 6 January.