One of the editors behind last year’s ‘Power up the North’ campaign to highlight the need for action to tackle the North – South divide has described it as the “finest hour” in the history of regional media.

More than 30 newspapers across the North came together last June to call for a “revolution” in the way the communities they serve are treated by Westminster.

This evolved into a ‘Manifesto for the North‘ published in the run up to December’s general election, again running across multiple titles and publishing groups.

Now Yorkshire Post editor James Mitchinson has credited the campaign with changing government minds on the issue and setting the agenda for Boris Johnson’s drive to ‘level-up’ the regions. 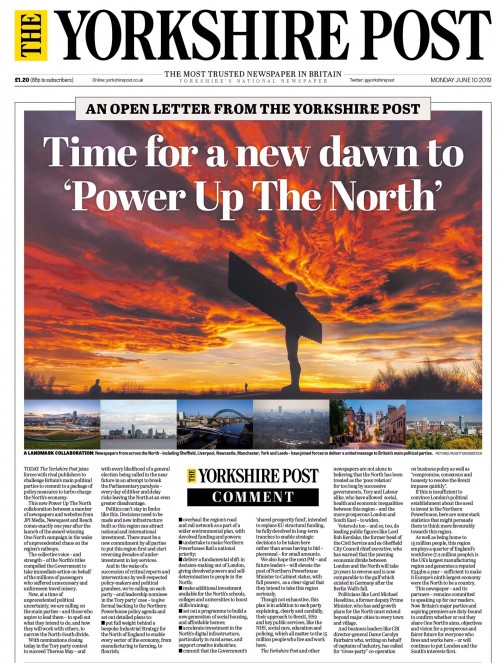 Writing in the New Statesman, James likened the campaign to the original vision of the paper’s founders in 1754 – eight years after the British government crushed the Jacobite rebellion at Culloden.

“In answer to the question “what role can the media play in shaping policy and effecting change” I say this: the exact same role it has played since its inception. Now, however, we must do it collectively and in complete collaboration with the communities we have proudly stood alongside for generations,” he wrote.

“For too long we have allowed ourselves to be pitted against one another. Our histories, cultures and identities have been weaponised against us. Cynically engineered ways of distracting the regions from perpetual, systemic, institutional neglect have led to parts of this place we call home drawing comparisons with collapsed Communist East Germany at the point of Reunification.

“But in 2019 “Power Up The North” changed everything. On behalf of our readers some 40 news brands in the North of England, jointly led by The Yorkshire Post and Manchester Evening News, channelled the anger, frustration and desperation of the 15.3m people who live in the North. We demanded change.

“Had we not listened to the cries for help by our readers and turned them into meaningful, campaigning journalism, I am utterly convinced that this Prime Minister and his government would not be whistling “level up” tunes.

“I believe “Power Up The North” was the regional media’s finest hour; our own Culloden. On this occasion the Jacobites emerged victorious from the skirmish with government. Our battle for acknowledgement was won, but the war for ending regional inequalities has barely begun.”

The full piece is behind a metered paywall but is available here to subscribers.