A police chief has backed a regional daily’s call for tougher sentences for those who assault emergency workers.

Inspector Jim Gray, chairman of the Northumbria Police Federation, has lent his backing to Newcastle daily The Chronicle’s Justice for Heroes campaign.

HTFP reported last week how The Chronicle has launched the campaign after an armed thug who attacked paramedics and a police officer walked free from court.

Insp Mullen told The Chronicle he feared more officers could be killed in the line of duty unless stronger deterrents are introduced. 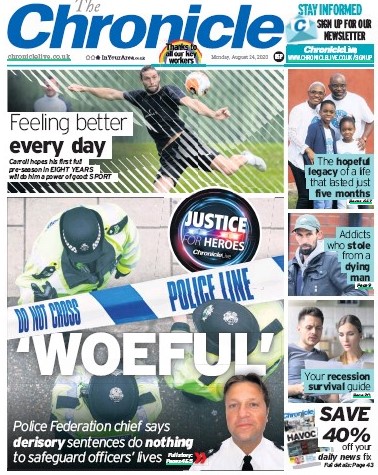 The newspaper splashed on his comments on Monday, pictured above.

Insp Mullen said: “The derisory sentences which we continue to see are simply woefully insufficient in terms of deterrence, which sends entirely the wrong message and, as a result, does nothing to safeguard the lives of those whom we, as a society, ask so much of.

“Enough is enough and it is now long overdue for those in government, those responsible for sentencing guidelines, those in the criminal justice system, and those in the judiciary, to protect and support those people who, on a daily basis, put themselves in harm’s way to protect the public.

“To assault a police officer, or any of our emergency services worker colleagues, is to attack our society itself and should never be accepted as ‘part of the job.'”

Helen Dalby, audience & content director for Reach in the North East and Yorkshire, previously told HTFP: “Our frontline heroes risk their lives for us every day.

“It has been fantastic to see their bravery and dedication recognised by the community through powerful initiatives like the Clap for Carers and other local and national events.

“However, our emergency services need more than demonstrations of support, as moving and appreciated as these clearly are. They need to be protected in their vital frontline roles.

“Chronicle Live is therefore sending a clear message not only that attacks on emergency workers are unacceptable – but crucially, that there must be consequences when they do occur. For this to happen, the tougher sentencing powers already in place must be used to their full effect.”