Police action has been taken against two people who sent online abuse to a regional journalist – including one who branded her a “f***ing dumb bitch”.

A woman has accepted a community resolution and apologised to Amy Fenton, chief reporter at South Cumbria daily The Mail, after sending her an offensive message on social media.

HTFP reported in May how Amy was forced to flee her home after receiving death threats online. 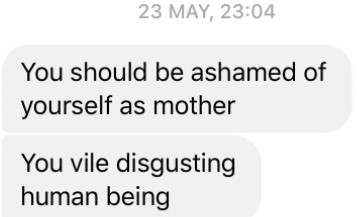 A screenshot of some of the abuse sent to Amy Fenton

In the message in question, shared by Amy on Twitter, the woman told her she “should be ashamed of yourself as (sic) mother” and branded her a “vile, disgusting human being”.

Accusing her of siding with “grooming gangs”, she then called Amy a “f***ing dumb bitch”.

The matter was dealt with by Staffordshire Police, with a force spokesperson telling HTFP: “We were notified by another police force that an offensive message had been sent from our force area via social media.

“The matter has since been dealt with through a community resolution.”

In a separate incident, a 19-year-old woman has accepted a caution from Cumbria Police over a malicious communication sent to Amy.

According to Amy, the woman sent her “numerous vile messages” including one in which she said: “People are after you”.

A Cumbria Police spokesman said: “A 19-year-old woman from South Cumbria has accepted a caution following an allegation of sending malicious communications to a woman aged in her 30s.

“The woman was cautioned on Sunday 2 August.”