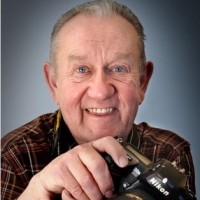 A regional daily photographer who was credited with changing the way pictures were used in the paper has died aged 76.

Tributes have been paid to Tony Colling, who worked for the Sunderland Echo for almost half a century.

Tony, pictured, began his career at the Echo as a 16-year-old in 1960 and remained there until his retirement in 2008.

Former colleagues have credited him with the “lasting achievement” of improving the way photos complemented stories in the newspaper.

Former photographic department colleague Angela Burn told the paper: “He changed the Echo with his photographs.

“He was a talented photographer who got the highest marks in the country when he took his proficiency test and he was so keen that the diary just used to be a list of ‘C’s for Colling because he volunteered for so many jobs.

“All the girls used to read the Echo together, guessing the Tony pictures because they stood out so much.”

Tony died after a short illness in Sunderland Royal Hospital following a six-month battle against cancer.

Early in his career, he covered the 1962 Seaham lifeboat disaster, a national story, when all the crew and all but one of the rescuers perished in a storm and mountainous seas off Seaham Harbour.

He also enjoyed covering royal visits, and was even contacted by Princess Margaret’s staff for copies after he photographed her.

Tony habitually wore a bow-tie during assignments and was known on his Wearside patch as “the photographer with the bow-tie.”

He retained a “boyish enthusiasm” for his work and would regularly say: “I couldn’t believe they wanted to pay me for what I loved doing anyway.”

Tony married Echo journalist Linda in 1971, and he is also survived by sons Alistair, Charles and Thomas, and five-year-old grandson Sonny.

He was awarded life membership of the National Union of Journalists, a feat Linda also achieved, having supported a strike over wages and conditions at the Echo in the 1980s.

“His legacy will be on display in the homes of thousands of Wearsiders whose lives he recorded for the Echo, including ours.”

* Tony’s funeral will be held on Wednesday 7th October at St Gabriel’s Church, Sunderland at 12.45pm before a short service of commital at Sunderland Crematorium at 1.30pm.