Out of work journalist helps hundreds get free local paper 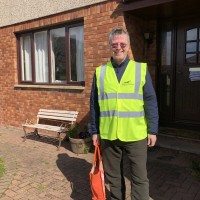 Hundreds of local newspapers are being delivered to care homes, sheltered housing and vulnerable individuals thanks to a freelance journalist put out of work by the coronavirus crisis.

Alasdair Northrop, a journalist for more than 40 years, has helped set up a project which pays for copies of the East Lothian Courier to be given free to vulnerable people who were not already receiving it.

Alasdair, pictured, who has worked as a tourist guide in Scotland for the past four years and has been left without work due to the pandemic, came up with the idea while working with his wife Sue, a community councillor in North Berwick.

Thanks to the scheme, backed by Courier editor Robbie Scott, 600 copies of the Courier have now been paid for by community organisations for delivery to those who need them.

Alasdair, who was editor of Scottish Business Insider magazine for 15 years and business editor of the Manchester Evening News for seven years before that, said: “I have been involved in newspapers for over 40 years and even when I started out we were being told printed newspapers would be killed off by TV and radio within a short time.

“Over the years the numbers have dropped dramatically but for the time being, at least, there is a real need for them.

“There are lots of people out there who still enjoy reading a printed paper, in particular senior members of our community.

“Crucially they provide essential information and keep people informed. So I am proud to have been involved in a scheme to support my local weekly newspaper.

“I hope other areas of the UK follow suit and this may be a way of saving the wonderful local newspapers which play such an important role in their communities.”

The idea came about after Sue set up a resilience group in North Berwick to deliver shopping and collect prescriptions for vulnerable people who were not allowed to leave their homes, with local groups communicating via email and WhatsApp.

But Alasdair realised that many people were excluded because they did not have the internet and the only way they could find out about what was going on was through the Courier.

Sue said: “The key thing was that we wanted to support our local newspaper but also not take away income from local newsagents.

“We tried to make sure the paper was not going to people who already had it delivered by their newsagents. We were also thinking about people who could not afford to buy it.”

Robbie added: “We’re so grateful to these groups for supporting our communities during lockdown and the amazing work they do inspires us to produce the best papers that we can.

“For them to also directly support us at a difficult time for all businesses is incredible and we thank them immensely.”