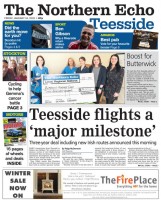 Editorial roles are at risk as a regional publisher seeks to cut costs in the wake of the coronavirus crisis, according to union chiefs.

Last week HTFP reported that Newsquest was set to make redundancies after chief executive Henry Faure Walker told employees the company was “unable to support” the staffing levels it had pre-lockdown.

Now the National Union of Journalists has published a breakdown of how it believes each of the Newsquest publishing centres will be affected.

Among the titles affected is the Darlington-based Northern Echo, pictured, which is set to see three sports journalist roles combined into a single new role.

The post of Teesside editor is also set to go, although it is understood that the Teesside edition itself, launched six months ago, will continue.

According to the NUJ, the full list of roles at risk is as follows:

Fed Bedendo, Newsquest NUJ group chapel MoC, said: “Our members have done a brilliant job in adapting to the difficulties brought by the coronavirus and have been very understanding of the needs of the business, an example of this has been staff absorbing a painful temporary pay cut to help our publications survive through a very challenging situation.

“Our newsrooms are already stretched to the maximum and as professional journalists we neither want to see the quality of our work drop nor our stress levels go through the roof.

“We need reassurance that there is a strong plan in place for us to continue to serve our communities properly and safely.”

Newsquest has previously said that most of the current cutbacks will affect sales roles and that it aimed to preserve the “vast majority” of journalist jobs.”

A spokesman said last week: “Like many other local media groups, our business has been hit hard by Covid-19.  Although, we have seen phenomenal growth in online audiences to our websites as people seek out trusted local news, we have experienced heavy declines in our advertising revenues.

“Unfortunately, there will be some redundancies, principally in advertising sales.  Whilst some editorial roles are likely to be affected, we believe we can maintain the vast majority of journalist jobs and sustain front line reporter resource in particular.”