Regional newspaper editors and journalists have discussed the “strange” experience of covering football clubs being promoted via a press release.

With no play possible since March due to coronavirus, English football’s third and fourth divisions, League One and Two, voted earlier this week to end the season before all matches were completed.

Promotion from the divisions was instead decided by the English Football League using a mathematical points-per-game formula.

As a result, Coventry City and Rotherham United have been automatically promoted from League One, while Swindon Town, Crewe Alexandra and Plymouth Argyle went up from League Two. 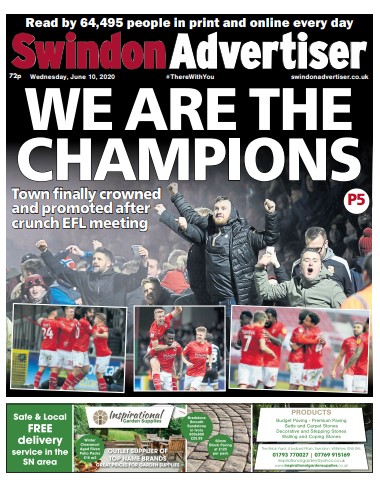 Chris Errington, who has covered Argyle for the Plymouth Herald for 24 years, said he had “never known anything” like the situation before.

He told HTFP: “First, Argyle’s promotion was confirmed by a press release from the EFL at 3pm on Tuesday, not in front of a packed Home Park after a famous win. The city of Plymouth usually goes wild after an Argyle promotion, but not this time.

“The one way that it was marked by the city was by the lighting up of Smeaton’s Tower, the lighthouse perched on top of The Hoe, in green and white on Tuesday night. Then, on Wednesday, I attended my first-ever socially-distanced press conference at Argyle’s ground, Home Park.

“Manager Ryan Lowe spoke to myself and the local media, with each of us sat the appropriate distance apart. It was good of the club, by the way, to arrange such an event in the circumstances.

“Then, in the afternoon, I had a Zoom interview with Argyle’s United States-based owner/chairman Simon Hallett.

“To say, we are living – and working – in strange times does not do it justice does it? And there is still the prospect of games being played behind closed doors to come.”

The Swindon Advertiser splashed on the announcement on Tuesday, pictured above.

Editor Pete Gavan told HTFP: “It’s been a long and frustrating wait for Town to be crowned champions but we knew it would likely be on Monday after the EFL meeting.

“Obviously the circumstances are somewhat strange and it certainly curtailed some of what we’d usually do on what is a great day for the club and the town.

“But we spoke to the manager and club captain for immediate reaction, then via email got in touch with some superfans we’d previously done stories one. That, along with online comments, gave us a good reaction piece.”

He said: “We took a team of five reporters and photographers down and produced a 24-page special. It is the fourth time Rotherham have won a promotion since I started here in 2012 (I’m not claiming any credit – there have been two relegations as well!) and this time it was very subdued.

“Like everyone else, we were kept waiting a long time for confirmation and the club sent an email saying they were holding a Zoom press conference at 7pm, which featured the chairman Tony Stewart and [manager] Paul Warne answering questions and having a socially distanced glass of champagne on the pitch.

“We were allowed to take pictures but it wasn’t the usual case of players hanging around waiting to be interviewed, cracking open bottles and celebrating.

“The chairman, manager and captain Richard Wood all provided us with exclusive columns and all played it down by saying the promotion was a relief but not how they would have liked to have done it. Warney gave us a timeline of his promotion day and we also printed a couple of comment columns from fans.

“We’re not anticipating the usual open top bus parade and going out taking pictures of celebrating fans in the pubs afterwards this year.”

HTFP reported in April how the Dundee Courier had covered a bizarre double after two football clubs on its patch were voted champions of their respective leagues due to the pandemic.