A newspaper has apologised to two football clubs after depicting their crests on the end of a bloodied knife.

Glasgow’s Sunday Mail has said sorry to Partick Thistle and Heart of Midlothian over the “violent image” which appeared on its back page on 17 May.

The image in question accompanied an exclusive about the possible reconstruction of Scottish league football due to the coronavirus pandemic.

The Mail reported how Ann Budge, owner of relegated Hearts, had been warned “not to light the fuse under a new civil war in Scottish football” over proposals which would keep her club in the top division. 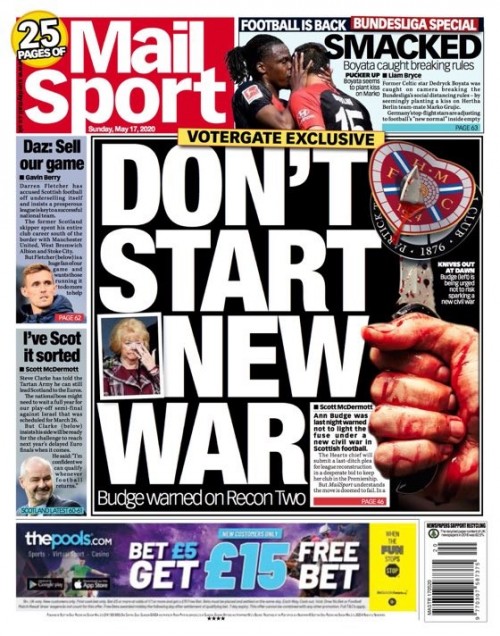 The paper touted Thistle as one of the club whose backing she would need to win to push the plan through.

But the image drew criticism from Thistle, who posted on their official Twitter account: “Completely inappropriate, shocking and irresponsible.

“Our club crest should never have been used in this way.

“The club awaits an explanation and apology for the unwarranted use of this violent image.”

Mail editor Lorna Hughes told HTFP she had apologised to both clubs involved.

She said: “The insensitive use of a graphic that appeared on the back page of The Sunday Mail on Sunday 17 May in relation to a story was entirely inappropriate and should not have been used.

“It was an error of judgement using an image that has no place within the sports pages of the paper.

“But as editor, I take full responsibility when we get things wrong.

“I have apologised to both clubs involved and an apology will also appear in print this Sunday.”