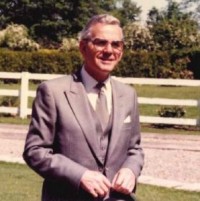 A journalist who spent his entire carer with a regional daily has died aged 91.

Tributes have been paid to Chris Brayne, pictured, rose from office junior straight from school to assistant editor on York daily The Press.

John Richardson, who worked with him on the newsdesk at The Press, told the newspaper: “Chris was a reporter who through his loyalty and devotion to the city was entrusted to write a daily leader under the pen name of John Blunt, reflecting the views of the editor on local issues.

“When he became news editor, he welcomed incoming reporters to the staff with his familiar creed: ‘You are now working for a paper of record.’

“Chris was a man who earned respect without raising his voice and his attention to detail and quiet charm – charm is often in short supply among the egos in a newsroom – were easy to underestimate.

“You could always ask Chris the name of a vicar in York, how to address the Dean of York by his title. Name a councillor. Or say whether a street was a road or an avenue. He didn’t need a directory. His memory was as reliable as his smile, which thankfully was never far away.”

Chris was a member of York’s crime prevention panel, a link with the police which, according to John, “won him the trust of senior officers”.

He added: “What many reporters did not know was that he was totally obsessed with flying. He loved holidays abroad with his wife Bridie, but perhaps she knew that for him, getting there and back in a plane was probably the most exciting part.

“He became a member of the Rufforth Gliding Club, graduating to instructing and earning a high-performance licence to take passengers on flights and even when ill-health prevented him going solo, there were always plenty of friends at the club to take him up to enjoy from the air the countryside he knew almost as well as the streets of York.”