A regional pub critic who underwent a “hasty rebrand” due to coronavirus restrictions has started life at home by reviewing his own shed.

HTFP reported last week how Kent Online had rebranded its reviewer the ‘Secret Drinker’ as the ‘Home Drinker’ ahead of nationwide pub closures.

The anonymous journalist has since stocked up on bottles of beer to be reviewed for the column and took to his own “man cave” to review them.

The shed itself received three stars for both decor and atmosphere, which was described by the Home Drinker as “wooden”, while the self-service nature of the shed meant staff received no stars at all. 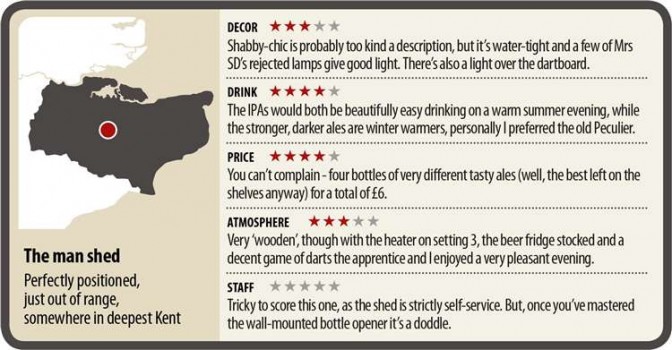 The Home Drinker has also revealed he could soon be reviewing his own produce – after taking up home-brewing following the acquisition acquiring a brew-at-home kit from Germany.

He told HTFP: “I will not only be able to produce a virtual taste-testing of my wares within the next couple of weeks, but when we’re through this horrendous virus, will be perfectly placed to challenge Shepherd Neame as Kent’s number one brewer – albeit with a Bavarian slant.

“I did hear a rumour Sheps had invited me for a tour of its brewery, with me in disguise of course, and I was obviously keen but I suspect becoming its number one competitor may leave the company feeling it is safer to withdraw my invitation.

“Fortunately I have fitted a running (filtered) water supply to my man shed so brewing can commence immediately. The brew kit will arrive in a large white van which will almost undoubtedly block the road.

“However, as I have been reviewing Kent’s wonderful drinking establishments uninterrupted for very nearly a year now (without missing a single week, now there’s dedication) I am coming under pressure to produce a list of the very best, and very worst, on offer. But, as soon as this important work is complete, brewing will start in earnest.

“And, providing my foray into brewing goes well, I could be persuaded to virtually review anything, the sky’s the limit. If you want something reviewing I’m your man – I can even supply the virtual friends.”