News editor who was ‘public face’ of weekly dies aged 77 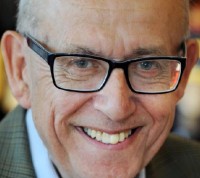 A journalist described as the “public face” of a weekly newspaper for more than 40 years has died aged 77.

Tributes have been paid to Peter Homer, who was on the staff of the Chichester Observer between 1966 and 2007.

During his time with the Observer, Peter, pictured, held roles including chief reporter and news editor.

He continued to cover local government issues for the paper after 2007 and also wrote a wine column.

“Peter was a true gentleman. He treated everyone with respect. His manner was always calm, his thinking always rapier sharp. When the really big and sometimes tragic stories broke, Peter would always bring a sense of peace and clarity to the newsroom.

“I know just how much he was admired by all the councils he covered – not least the district and county authorities. His sense of fairness, of political neutrality, his forensic attention to detail and accuracy singled him out as a reporter that every politician – whatever their colours – could trust.

“Editing his copy was always a joy. It arrived on time. It required no correction. The right and proper news angle was always captured in his introduction. He never resorted to cheap sensationalism.

“There are many better known national journalists who will never achieve the hallmarks of professional quality that Peter did here in our wonderful city of Chichester which he loved so much.”

Chichester city councillor and three times former Mayor of Chichester Anne Scicluna told the Observer: “Peter was one of Chichester’s great journalists, who always reported fairly and honestly, so that people were pleased to tell him things and give him their news.

“After his official retirement I frequently met him while he was on his daily walks and was sure of a cheerful greeting and a smiley face.

“The city gave him a Civic Award some years ago – an award which was richly deserved. We are a fortunate for having him as one of our citizens.”

Peter, who died last week after a short illness, is survived by his wife Jennifer and children Tom, Jack and Lucy.

Said Jack: “He was even-tempered, a sunny disposition and unassuming. He did not have many close friends, but he knew hundreds and hundreds of people.”

Details of his funeral remain to be confirmed.