New editor not ‘immune to criticism’ over being based off-patch 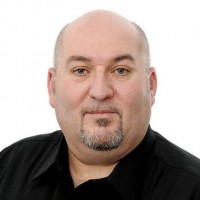 A new editor has vowed to make regular visits to his newspaper’s island patch after admitting he is not “immune to criticism” over where he is based.

John MacInnes, who is based on the Scottish mainland, made the pledge after taking over the top job at the Stornoway Gazette.

John’s appointment comes after the departure of Melinda Gillen, who held the role, for 16 years in August.

HTFP previously reported how Melinda had warned the public they need to be “willing to pay” for local journalists in a farewell editorial.

John, pictured, began his career at the Oban Times in the early 1980s and most recently held a role with JPIMedia encompassing several of the company’s Aberdeenshire and Angus titles.

Speaking to HTFP, John said there had been “an awful lot of change since those heady days” of his early career.

He said: “While I am based on the mainland rather than on the island, I am not immune to the criticism that newspaper staff should be based on their own patch.

“But, as I said earlier, times have changed, people’s methods of obtaining news have changed, and we must move with these changes whether we like them or not.

“I have made a commitment that I will be travelling to the islands on a regular basis. My employers, JPIMedia, have backed me on that, and this is just one way of mitigating for an editor who is not based in the Western Isles.

“In this case, we do have a local democracy reporter who is resident and keeps an eye on local government and other political news associated with the islands.

“My first visit is planned for early this month, coronavirus restrictions permitting, where I have organised to meet with various organisations and individuals, socially-distanced of course.

“In due course, it is my intention to organise and hold readers surgeries in order that I am not seen as an editor who is so far removed that he doesn’t listen to his readers, or that this could even be a perception.

“It’s important for me to build upon what the Gazette means to a great many people in the islands, and to continue being a provider of local news and the paper of record.”

John has worked at most of the major Scottish daily titles on and off as a Highlands correspondent and has also run his own freelance agency.