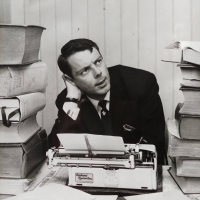 A new award for journalism students has been launched in memory of a former regional journalist and training chief.

The Solent branch of the National Union of Journalists has established the Bob Norris Award for Achievement, which will be given annually to three students across the South of England.

The trophy will go to one journalism student at the University of Portsmouth, one at Solent University and one at Highbury College.

It will recognise students who may not necessarily be the top performers in their year group, but who have achieved notable performance during their time at their place of study.

In a statement, the branch said: “This could be someone who has made exceptional progress or achieved well despite some form of difficulty, or who has contributed significantly towards the year group through support meetings/activities and so on.

“This approach was chosen as it reflects Bob’s own values in the field of journalism training.”

Bob’s widow Pauline Norris, a former journalist and chair of the NUJ Solent branch, said: “Bob encouraged hundreds of students across the UK to achieve the highest standards to the best of their ability.

“I am certain he would have been so very pleased and proud to be linked to this NUJ Solent Branch Achievement Award.”

The inaugural prizes will be awarded to students in this current year group before the summer.