Labour MP Lisa Nandy has used a regional daily to announce her candidacy for the party’s leadership.

In a letter sent exclusively to the Wigan Post, her local newspaper, Ms Nandy set out her reasons for standing and explained why she wanted to tell the newspaper’s readers first of her decision.

Ms Nandy, who has represented Wigan in Parliament since 2010, is so far the only candidate to announce her candidacy via the regional press.

The other declared candidates so far are Clive Lewis, Jess Phillips, Keir Starmer and Emily Thornberry. 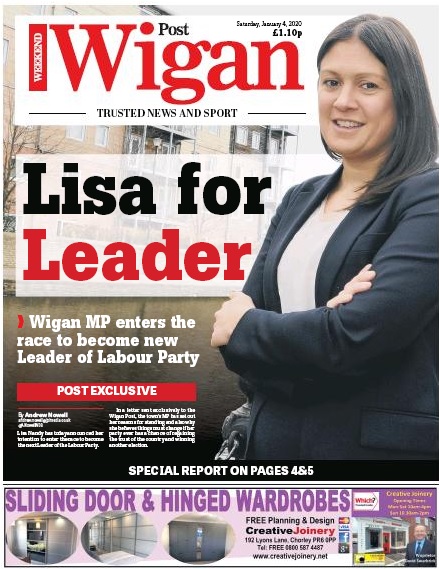 Ms Nandy’s announcement provided a splash for the Post on Saturday, pictured above, with the letter appearing online the night before.

In her letter, Ms Nandy wrote: “I understand that we have one chance to win back the trust of people in Wigan, Workington and Wrexham. Without what were once our Labour heartlands we will never win power in Westminster and help to build the country we know we can be.

“I have heard you loud and clear when you said to earn that trust means we need a leader who is proud to be from those communities, has skin in the game, and is prepare to go out, listen and bring Labour home to you.

“I wanted to tell you first that I’m standing to be leader of the Labour Party because after a decade of having the privilege to represent you, I have a deeper understanding of what has gone awry in our discredited political system.

“I’m standing because I know too many people in places like Wigan no longer feel they have a voice in our national story. So many of you have told me you believe many leaders are not interested in what you have to say and are unable – or unwilling – to understand your lives. I believe you are right.”