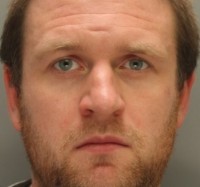 A man who threatened to castrate and kill a regional daily journalist has been jailed for two-and-a-half years.

Joshua Gibbs, pictured, made threats to Liverpool Echo political editor Liam Thorp and two other members of staff at the newspaper.

Gibbs told a member of the Echo’s admin staff on the phone that he would cut the throats of both her and Liam, and later told a colleague he would “come down the office and f***ing cut Liam’s testicles off and put them down his throat.”

Liverpool Crown Court heard he had sent “chilling threats” after being pulled up over a Twitter post about ex-Wavertree MP Luciana Berger by former Echo business reporter Tony McDonough.

Gibbs told Tony to “get a spade and f*** your dead mother, you four eyed p****”, and later published a separate post pledging to pay £100 to the first person “to message me this Zionist scumbag Tony McDonough’s home address”.

Liam had reported one of the offensive tweets to Twitter, and the two had an exchange on the social media site, prompting Gibbs to contact the Echo demanding Liam be fired.

After he was told he wouldn’t be, Gibbs emailed Liam on 25 September and said: “I’ve tried to do this diplomatically but now I will have to come and smash up your office.”

A member of Echo admin staff also received the threatening email and a “more disturbing” phone call, in which Gibbs told her: “I don’t f***ing care if you’re a f***ing woman, I will f***ing come down there and f***ing cut your throat.

“I will then slit Liam Thorp’s throat, he should be f***ing sacked, Twitter said my tweet wasn’t bad and they let me off, I’m going to f***ing kill you.”

Gibbs rang again and spoke to another member of admin staff, repeating four times: “I will come down the office and f***ing cut Liam’s testicles off and put them down his throat.”

The Echo reported the threats to the police and two officers went to Gibbs’ home the following day.

He denied any of his tweets were racist but said he had gone too far – claiming his Asperger’s meant he didn’t know when to draw the line.

The 32-year-old has six past convictions for 12 offences, and was jailed  in 2017 for four counts of breaching a restraining order and threats to kill, relayed to a nurse at mental health unit Broadoak.

Gary Lawrenson, defending, told the court his client “doesn’t seek to hide behind his condition of Asperger’s” but acknowledged: “The complainants in this case are completely innocent and they didn’t deserve to be spoken to in the way that he did and so he would apologise to them.”

Passing sentence, the judge said Gibbs was “dangerous” and added: “You are a highly intelligent man and know what effects your offences have.”

Posting a link to the Echo’s coverage of the sentencing on Twitter, Liam wrote: “Very odd to see threats against me – and my manhood – on our website.

“But this was a deeply unpleasant situation for me, my family and the colleagues and others targeted and just shows the dangers of social media. We all need to be kinder to each other.”