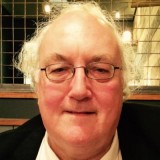 A chief reporter has claimed that a lack of well-resourced local newspapers is playing a “significant part” in the rise of the far-right.

Martin Shipton, of the Western Mail, has warned changes in the industry have created a “vacuum” filled by social media material which pushes “often racist” solutions to problems.

He has shared his concerns in a piece for the National Union of Journalists as part of its Local News Matters week, writing in his capacity as Reach NUJ group chapel chair and a member of the union’s Welsh executive council.

Martin, pictured, described the “changing culture of newsrooms” as “seriously worrying” in the piece.

He wrote: “News values have changed. A story is not judged on its own merits, but on how many page views it will generate.

“A piece about Wetherspoon’s new menu (much the same as the old menu) is rated highly because of the number of page views obtained from the large numbers of people anywhere who for reasons best known to themselves have an insatiable appetite for trivia relating to the pub chain.

“Reporters are under pressure to get as many page views as they can. Inevitably this frames the kind of pieces they will write. Faced with a requirement to constantly increase their contribution to company targets, they will inevitably change their behaviour and – too often – make news out of trivia and trivialise the news.

“But while people are, to one degree or another, consuming such material, they are becoming alienated from their local communities and the decisions that are being made in their name.

“A vacuum is created, and it’s filled by unwholesome material from social media that pushes views that offer simplistic, and often racist, solutions to complex problems.

“Of course there are other factors involved in the rising influence of far-right narratives, but I believe the decline of well-resourced local papers rooted in their communities has played a significant part.”

Reach plc, which publishes the Mail, declined to comment when approached by HTFP.