A journalist who will be one of only two attendees at her father’s funeral because of coronavirus restrictions has paid tribute to him the “only way” she can – by writing his obituary in the paper she works for.

Lucy Ashton penned the tribute to former Labour MP for Bassetlaw Joe Ashton in Monday’s edition of Sheffield daily The Star where she works as local democracy reporter.

Sheffield-born Mr Ashton, who represented Bassetlaw for 33 years, had been living with dementia and his death was unrelated to COVID-19.

The publication of Lucy’s obituary for him prompted dozens of responses from well-wishers on Twitter, including her father’s former political colleagues and other famous names. 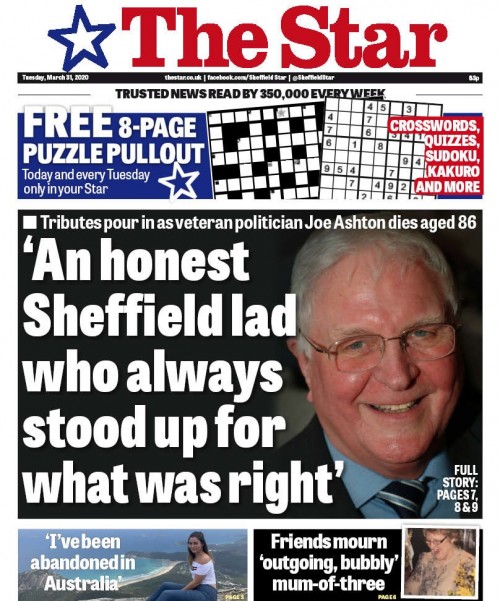 The Star splashed on Mr Ashron’s death on Tuesday

Posting a link to the tribute piece, Lucy wrote: “My dad has passed away. I wasn’t able to be with him at the end because of COVID-19.

“The funeral will just be me and my husband and I can’t even buy flowers. So I wrote this because it’s the only way I can pay tribute to him and say goodbye. RIP Dad.”

Lucy told HTFP: “I would really like to thank every single person who tweeted words of comfort, from old friends to complete strangers.

“I had the loveliest message from actor Mark Charnock, who plays Marlon in Emmerdale, who sent his love even though we’ve never met.

“As we’re self isolating, we haven’t been able to come together as a family to share our grief but the overwhelming number of tributes and the wonderful comments have been an incredible support.

“In the absence of a proper funeral, we’ve able to celebrate my dad’s life on Twitter.”