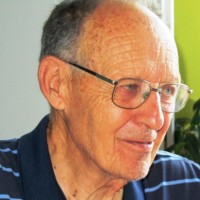 A journalist who served the regional press for more than half a century and continued writing for newspapers into old age has died aged 90.

Tributes have been paid to Alan Wiltshire, pictured, who worked for the Southern Daily Echo and the Romsey Advertiser during his 55-year career and has passed away after a short illness.

Among the big stories he covered during his career was the return of round-the-world sailor Sir Francis Chichester in 1967 after completing his 30,000-mile voyage.

He also had the sad task of covering a fire which ripped through Holbury Manor, in Hampshire, which had been his parents’ home until shortly before the blaze.

After a brief foray into teaching he joined the Romsey Advertiser in 1983, working there full-time – and later part-time – for many years.

According to the Echo, he continued to write articles until a few weeks before his 80th birthday.

Away from journalism, Alan was a keen cricketer who played for Hythe and Dibden for more than 30 years.

A statement on the club’s website stated: “When staff in his office couldn’t find him they knew he’d be down watering the square – such was his commitment.

“Sadly in the early nineties Alan decided to move out of the village and his 31-year association with Hythe was over. A massive blow for the club.”

Mr Wiltshire’s family told the Echo: “Alan remained active and alert until the last year of his life, cycling everywhere well into his 80s and only stopping when his eyesight started to fade.

“He married Eileen in 1954 and they celebrated their 65th wedding anniversary in 2019, although she sadly passed away soon after.

“His final weeks were spent in Dunwood Manor nursing home, where he celebrated his 90th birthday with his family.”