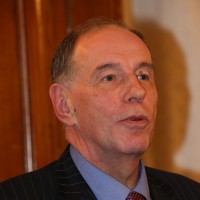 A photojournalist who went on to run one of Britain’s biggest news agencies for more than 40 years has died aged 68 after a short cancer battle.

Tributes have been paid to Chris Johnson, left, who owned the Liverpool-based Mercury Press Agency.

Such was his standing, he earned the nickname ‘Mr Liverpool’ during his 50-year career.

Chris died on Thursday, surrounded by his family, just three months after being diagnosed with cancer of the oesophagus.

Colin Myler, former editor of the Daily Mirror and New York Daily News, said: “Chris loved life but life loved him more. We started our careers at the Catholic Pictorial in Liverpool in the same week.

“He was a junior photographer and I a junior reporter, we were both 16. Chris was a remarkable talent.

“He went on to own Mercury Press, one of the leading news agencies in the UK. He nurtured and mentored a stable of brilliant young journalists and photographers.

“Chris was an extraordinary kind and generous man who enriched and changed people’s lives for the better. His voice, his leadership and his presence is a huge loss to journalism and, particularly, to his beloved city of Liverpool.”

Born in Atherton, Lancashire, in 1952, Chris got his first camera, aged eight, from his parents Theresa and Henry.

He began his career aged 16 as a photographer on The Catholic Pictorial newspaper, before landing a reporting job at Mercury Press.

George Moran, his first boss at The Catholic Pictoral, said: “Chris was a rare talent. He exuded such confidence. I never taught him a thing.

“But I’m proud that I was able to spot a level of ambition he could never fulfil at ‘The Pic’.

“When Chris was looking for a new job, Mercury Press, the natural next step, already had too many photographers. So I advised him to apply as a reporter, which proved to be the making of him.

“Chris was a trusted friend to many and a loving father figure to everybody he took under his wing.”

Chris was a key member and organiser of the Liverpool Press Club, also serving as an active member of the National Association of Press Agencies for 20 years – including five years as chairman and another four as secretary.

He received Lifetime Achievement Awards from both NAPA and the Liverpool Press Club in recognition of his years of service.

Chris also worked as press agent for Denise Fergus, mother of murdered toddler James Bulger, supporting her pursuit of justice for a quarter of a century.

In recent years he moved into broadcasting, co-founding Bay TV Liverpool in 2014.

Bay TV merged with Made Television in 2016 and Chris stepped down as station manager at the rebranded Made in Liverpool the following year.

With continued restrictions in place surrounding funeral arrangements due to the coronavirus pandemic, his family have asked for donations to his favourite charity, the James Bulger Memorial Trust.