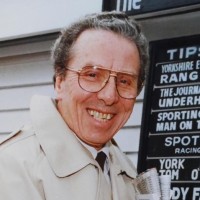 A journalist who served a regional daily for more than 50 years and conducted an impromptu interview with the Queen while receiving his MBE has died aged 90.

Tributes have been paid to John Morgan, pictured, the long-serving sports correspondent at the Yorkshire Evening Post.

He even managed to sneak in a brief interview with the Queen as she presented him with an MBE for services to charity in 2005.

His son Richard, 67, told the YEP: “It was the year the Ascot Racecourse was being rebuilt and Royal Ascot was being moved to York Racecourse.

“He asked the Queen what she thought of the move as she pinned his medal on. She said it would be very interesting.

“He came out of Buckingham Palace and phoned the YEP and the story was on the front page ‘Morgan gets gong and interviews Queen.'”

John, who had lived with vascular dementia for around 10 years, died on 12 May at a home in Leeds with his wife Maureen, 90, and daughter Stella, 65, by his side.

“What he didn’t know about sport – any sport – wasn’t worth the effort. He was regarded, certainly in Yorkshire, as the absolute authority in all sporting matters.

“But it will be his (awful) jokes and brilliantly hilarious stories, his freely offered professional help to younger colleagues and his generous friendship I’ll remember from our days at the YEP.

“No one could fill a room with laughter like Johnny. Legends are made from John Morgan’s DNA.”

Veteran YEP photographer Steve Riding added: “John was great to work with when I was a junior photographer, he always had time to help. But my biggest memory of John was that it did not matter what sportsman we met – they were friends with him.

“Racing, football, rugby, cricket, he knew everyone, but more importantly they knew him. He had such a wonderful manner with people and it really was a pleasure to work with him.”

John, who started work as a 14-year-old office junior at the YEP in 1944, trained as a journalist and worked in the racing department before later moving to cover all sports.

In the 1970s he set up ‘Morgan’s All Stars’ fundraising cricket team, which featured Leeds United players including Eddie and Frank Gray, Paul Madeley, Norman Hunter and Peter Lorimer, as well as rugby players, Yorkshire county cricketers including Geoff Boycott and celebrities from soap opera Emmerdale.

The All Stars raised thousands of pounds for charities, including the YEP’s Half and Half Appeal in aid of St Gemma’s Hospice and Sue Ryder Wheatfields Hospice.

Ex-YEP reporter Pete Lazenby served with John on the committee for the annual fundraising Leeds Press Ball, which was held at Leeds Town Hall for many years.

Said Pete: “John was always the master of ceremonies and would come out with his corny jokes that we had heard a hundred times, but everybody would be bursting out laughing.

“He was an irrepressible entertainer. He was wonderful company and a tremendously big-hearted man. It was a pleasure to know John and to be one of his colleagues at the YEP for so many years.”

Retired YEP reporter Tony Harney added: “I worked alongside John Morgan for almost 50 years. He was more than a very talented sports reporter, he was a fine journalist and highly regarded in all walks of life.

“He was a great family man and tireless worker and fundraiser for many charities. John’s humour and friendliness made life more enjoyable for everyone fortunate enough to rub shoulders with him.”

His middle son Philip died from natural causes in 2003 aged in his early 40s.