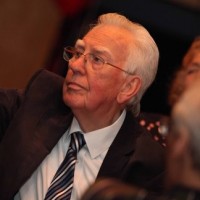 Tributes have been paid to Reg Harcourt, who worked on titles including the Nottingham Evening Post and the now-defunct Evening Despatch in Birmingham.

Reg, pictured, later went on to the Caters News Agency, before undertaking a broadcasting carer with ATV Midlands and as ITV Central’s political editor.

He was the only TV journalist present when the controversial politician gave the 1968 speech, in which he claimed that “in this country in 15 or 20 years’ time the black man will have the whip hand over the white man”.

“He always took great delight in recalling times which were filled with laughter.”