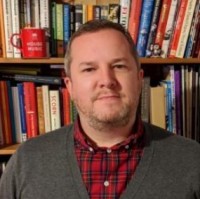 A regional journalist has revealed how writing an A to Z of pop musicians has helped his mental health during the coronavirus crisis.

James Iles, group production editor at Bullivant Media, has had his book ‘Talking About Pop Music: An A to Z of Hit Artists’ published after writing it during the pandemic.

The book is an alphabetical journey through his favourite bands and solo artists, charting some of the most successful recording stars in the history of pop.

The project began life as a regular feature for Bullivant’s weeklies in the West Midlands.

James, pictured, said: “Like so many people, gigs I had tickets for were cancelled and many artists also put recording sessions on hold, which brought home how much we missed music and the positive influence it has on our lives.

“My ‘A to Z of Hit Artists’ series started out as a regular feature for the papers but I soon realised it could become so much more, so I always had this book in mind.”

He added: “I am always reciting facts about bands, as well as listening to them, so I am thrilled to get the chance to share my enthusiasm for this topic in my debut book.

“Writing has kept my mind busy in what has been a very worrying time in the world, and a thoroughly enjoyable chance to reflect on some great pop music.”

James, 44, began his career as a reporter on the Bromsgrove Standard in 1997, was the launch editor of the Worcester Standard in 2000 and has also worked on the Birmingham Post as a sub-editor.