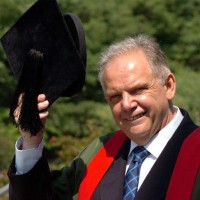 A journalist dubbed “the best writer ever to grace the pages” of a daily newspaper has died aged 77.

Tributes have been paid by editors past and present to Western Mail writer Mario Basini, described by one of his former bosses as “one of the great chroniclers of modern Wales.”

Mario, pictured, was by common consent “the biggest character” in the Cardiff-based Mail’s newsroom and seen as a father-figure by many colleagues.

Born in Merthyr Tydfil of Italian heritage, he wrote a 2008 book called Real Merthyr about his hometown.

Mail columnist Carolyn Hitt told the newspaper: “To many readers Mario Basini was the Western Mail. He was the writer I always turned to reading the paper growing up and when I joined the features desk in 1991 he was the writer I learned from.

“We sat together throughout my time on the paper and he was my journalistic father figure. I thought the world of him.

“He knew Wales inside out – its history, its culture and its people. This hinterland informed every word he wrote. And he wrote beautifully.

“His prose was as expressive as his personality. He was hugely respected and he didn’t have to seek out the biggest names for his interviews, they came to him.”

Carolyn went on to recall a message coming up from Thomson House reception saying: ‘Dylan Thomas’s wife Caitlin has turned up and wants to meet Mario’.

She added: “He was the biggest character in the newsroom. His occasional outbursts were the stuff of legend but they came from a place of love.

“He really cared about what he did and was frustrated with anyone who didn’t share that passion. And he could be extremely kind and wise, offering advice and encouragement to younger staff.”

She said: “He had an unrivalled way with words. It was to his voice that the paper turned to navigate our readers through many difficult news events – leading the paper on a Basini colour piece was a privilege.

“Like many uber-talented people he could also be an absolute handful. For a wide-eyed newly-qualified reporter fresh from my local weekly and heading into the colourful Western Mail newsroom he brought that journalistic step change to life.

“He once stomped through, stopping to pick up a ringing phone only to listen and then shout: ‘Ceri Gould? Who the **** is Ceri Gould?’ I was brave enough to claim the name.

“Once you’d gained his trust his loyalty was enduring and briefing him on a story was a dream – you knew that what came back would be clean, lyrical and, dare I say it, beautiful.”

Former Mail editor Alan Edmunds, now Reach’s chief operating officer, added: “Mario was a formidable journalist with a forensic approach and an exceptional writing style. He was Western Mail through and through.

“It was a privilege to work alongside him and to learn from him for so many years.”

Media Wales editor-in-chief Paul Rowland said: “My time at the Western Mail only overlapped with Mario’s by a few short months, but it was immediately clear the esteem in which he was held by his colleagues.

“He was one of the great chroniclers of modern Wales, both of its culture and its communities. He is a huge loss to Welsh journalism.”

And current Mail editor Catrin Pascoe added: “There is no doubt, he was a giant of Welsh journalism who cared deeply for the nation, its communities and the craft in which he excelled.

“I and fellow colleagues are so proud to have worked with him and to have learnt so much from him. He had such a presence in the newsroom – that big, booming voice! – and had such patience with every young journalist. Thank you Mario.”