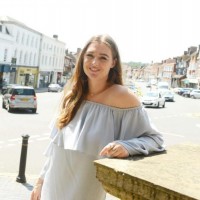 A journalism student is bidding to become Miss England after reaching the semi-final stage.

Isis Flack, who studies at the London College of Communication, is taking part in the contest, which is one step away from the Miss World pageant.

The 21-year-old is using the contest to raise money for vision charity Sight Savers after previously undergoing three intensive six-hour operations on her eyes after finding out she was progressively losing her sight.

Isis, pictured, who comes from Marlborough, spoke to her local newspaper the Wiltshire Times about her fundraising venture.

She said: “I’m running 5k a day for my duration in the contest, so basically until I win Miss England, or I’m eliminated, for the charities Sight Savers and the Miss World fundraiser Beauty with a Purpose which aids disadvantaged children all over the world.

“Progressing to the Miss England Final would mean the world to me. It would be incredible to represent Wiltshire and especially Marlborough on a national and even global level.

“To be able to represent and give back to such a memorable community would be an honour.”

A virtual semi-finals will be held on 31 July.

HTFP reported in 2017 how Grimsby Telegraph journalist Laura Gooderham was crowned Miss Great Grimsby & District, which she entered after being spotted by a former winner while interviewing contestants.

Laura qualified for the Miss England final as a result, and later left the newspaper to retrain as a teacher and compete in more pageants.