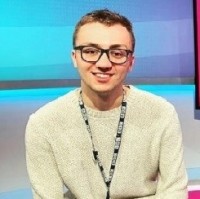 A journalism student has launched a campaign to raise awareness of those who live with stammers.

Jack Dinsley, who studies at the University of Central Lancashire, sometimes stutters when he speak and is now hoping to spread the word to schoolchildren that they should “be kind” to those living with speech conditions.

Jack, who is from Kirkham, in Lancashire, wrote a story about his experience of having a stammer for positive news publication The Happy Newspaper, and has now been invited to address pupils at a school in Huddersfield after a teacher there saw the piece.

The 20-year-old, who has written a column for Blackpool daily The Gazette’s ‘Junior Gazette’ page since he was 14, is hoping he will be able to visit more schools across the country in future to spread his message.

Jack, pictured, told the Lancashire Post: “My key message to the children is ‘Be Kind’ This is not just aimed at people who suffer with a stammer.

“It’s aimed at people’s friends. It’s not their fault they are born with a stammer.

“I want students with a stammer to realise their potential and by not giving up you can have a very successful career with whatever ambitions they may have.”