A regional publisher has announced the launch of two new newspaper titles with new journalism jobs being created as a result.

Newsquest is set to launch a Teesside edition of the Northern Echo and a new weekly paper called the Salford City News.

The new Echo edition will have its own dedicated editor in Nick Loughlin, currently sports editor, and will offer increased coverage of Stockton, Middlesbrough, Redcar and Cleveland – all part of the Echo’s existing patch but also covered by Reach plc’s daily the Teesside Gazette.

The Echo is currently recruiting ahead of the launch, and the jobs are being advertised on HTFP here.

The move follows November’s announcement by Reach that it was launching a digital expansion into several areas covered by Newsquest titles – including County Durham, which falls in the Darlington-based Echo’s patch.

The launch of the Salford City News, which will see two new jobs created, also sees Newsquest move in on an area traditionally covered by another Reach daily, the Manchester Evening News. 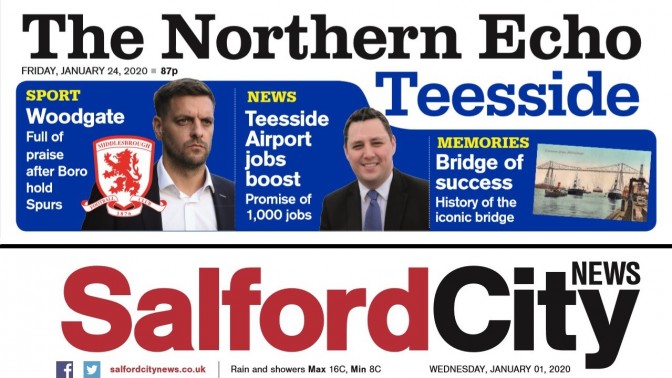 Echo editor Hannah Chapman said: “This is such an exciting time for Teesside, with a series of major projects in the pipeline which could bring massive economic boosts to the area.

“I regularly get asked by readers for more Teesside content, so taking the two things together, it seemed like a natural step to increase our coverage with this new edition. We’re also boosting our online offering, so readers can find out all the latest news and information.

“There is so much potential in the area, with Middlesbrough as the unofficial capital of Teesside, but also in the towns of Stockton, Yarm, Redcar and Saltburn, that we’re really looking forward to getting to the heart of the issues that matter in those communities.

“We’re hiring journalists with a passion for the area to help us tell those stories and deliver the quality news service that the people of Teesside deserve. We hope readers and advertisers will join us in supporting this new edition of the Great Daily of the North.”

The new edition will have the same cover price of 87p and £1.25 on Saturdays, while the Salford City News will launch in print with a cover price of 80p, and online, on Friday 24 January.

Karl Holbrook, Newsquest’s regional group editor for Lancashire and Greater Manchester, said: “Salford is an amazing place, full of history and culture. But there is a real sense on the ground that Salford is often ignored next to its louder sibling across the River Irwell. We think this is a crying shame.

“Salford deserves to have its own dedicated newspaper flying the flag for its residents and I am absolutely determined to bring the needs and concerns of real ‘Salfordians’ into the light with this exciting launch.”

He added: “We believe there is a sustainable publishing future in Salford as a weekly print brand and as the daily online provider of the best local content.

“We are recruiting talented local reporters, who know and love Salford, and will ensure this great community remains at the heart of what we do. Salford City News will do everything it can to be the beating heart of this.”