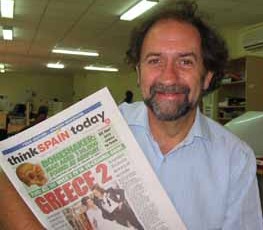 As previously reported on HTFP, Nub News is aiming to recruit up to 200 journalists in a bid to launch up to 700 news aggregation sites across the UK.

The new sites will cover Congleton, in Cheshire, Atherstone, in Warwickshire and Shotley Peninsula, in Suffolk, while Nub News will also be increasing its coverage of Grantham, in Lincolnshire.

The four new journalists have been recruited following a recruitment advertisement on HoldtheFrontPage.

Among them is Nick Hudson – himself a former HTFP reporter as well as a much-travelled former editor – who will be taking charge of atherstone.nub.news in his home county of Warwickshire.

Said Nick, pictured: “The town-in-your-pocket Nub News is giving back local news and views to where it belongs – and should never have left – in the community, and is allowing me to return to my journalistic and home roots.”

He said coverage of the Atherstone Ball Game has already gone down well with the local community with an audience reach of nearly 10,000.

Another experienced journalist joining the network is Derek Davis, who had already founded his own hyperlocal platform, Shotley Peninsula News, following 25 years in local, regional and national journalism.

He said: “My beliefs chime with Nub News’ core journalistic principles and I am keen to help spread this revolution through evolution in Suffolk.”

Also joining Nub News is Tom Avery who will be the regional editor for congleton.nub.news.

Currently the Alsager reporter for independent weekly the Congleton Chronicle, Tom has worked in the Congleton area for three years.

And Darren Greenwood will join the existing Lincolnshire team at the beginning of March to cover Grantham and the surrounding area.

He has 30 years of experience and knows the area well having worked for the Grantham Journal, Stamford Mercury, Bourne Local and the Rutland times.

Karl said all four journalists were hired as a result of the job advert on HTFP.

Said Karl: “HTFP has been incredibly useful to us. I have received over 100 CVs and interviewed over 70 journalists since January.

“My main message to those applying for jobs with Nub News is to do the research beforehand on the town (s) you’d like to cover and, importantly, why they would be suitable for Nub News.

“Ideal towns would be those situated near to our existing towns and/or those small or mid-sized towns where there has been closure or consolidation in the local press.”