A supermarket chain has backed a regional publisher’s anti-litter campaign by promoting it in more than 250 of its shops.

Reach plc’s In Your Area network has teamed up with Central England Co-op for a new phase of its ‘Don’t Trash Our Future’ campaign, which is demanding the introduction of tougher fines for littering.

The partnership will see 262 Co-op stores across the Midlands and South Yorkshire promote the campaign with posters and on digital screens, while messages of support will also be played on in-store radio systems from today. 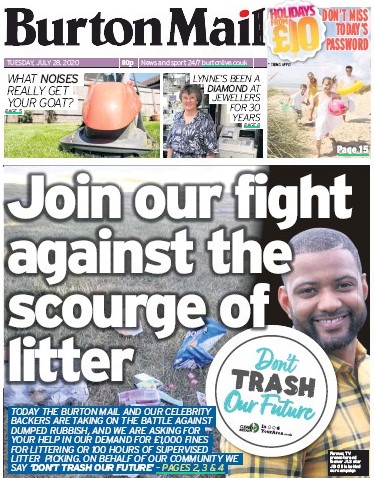 How the Burton Mail covered the campaign’s launch in July

Ed Walker, Editor-in-Chief of In Your Area, said: “The Co-op are the perfect partner for In Your Area and Clean Up Britain to tackle the country’s litter and waste epidemic.

“With their community-focused ethos, it made sense to join forces and amplify a vital message: sign our petition to force the government to increase fixed penalty notices from £150 to £1000 or enforce 100 hours of community service.”

The campaign, launched in July, also aims to make it compulsory for local authorities to enforce the law on littering.

Central England Co-op store manager Natalie Smith said: “We are committed to putting the co-operative values and principles into practice in everything we do and that includes being environmentally responsible.

“This is why we have joined forces with In Your Area to support this great campaign and are asking shoppers to back in any way they can and to help us come together and make a major difference.”