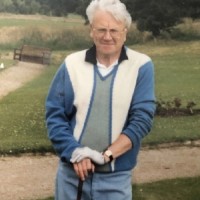 A former director and general manger of a then-regional daily has died aged 86.

Tributes have been paid to Ken Stark, who served on the board of the Halifax Courier prior to its takeover by Johnston Press in 1994.

Ken, pictured, worked for the Thomson Newspapers, in Newcastle, before joining the Courier in the early 1970s.

According to his obituary in the paper, his technical and engineering experience “proved invaluable as newspaper production made the transition from hot metal to web-offset printing and to computerised type setting”.

Following the takeover, he continued to work for JP got a short period before retiring.

Edward Wood, former managing director of the Courier, said: “I worked with Ken for about 25 years and he became a close and loyal friend, but not only to me.

“He was hugely respected by colleagues, who he treated with fairness and honesty.”

Ken, a native of Northumberland, met his late wife Jackie while in Newcastle and the par married in October 1965.

At the time she was a tele ad sales person with Newcastle daily The Chronicle, but when the couple moved to Halifax she became well-known for her voluntary and charitable work.

His son told the Courier: “He loved his time at the Courier. As a father he was firm but fair and although he was a private man he would become the centre of attention when at a party.

“He was well liked by many people.”