A former deputy editor who had two spells with a weekly newspaper has retired.

Joanne was formerly second in command at the Gazette & Herald before taking redundancy in 2011.

She returned to the paper three years later. 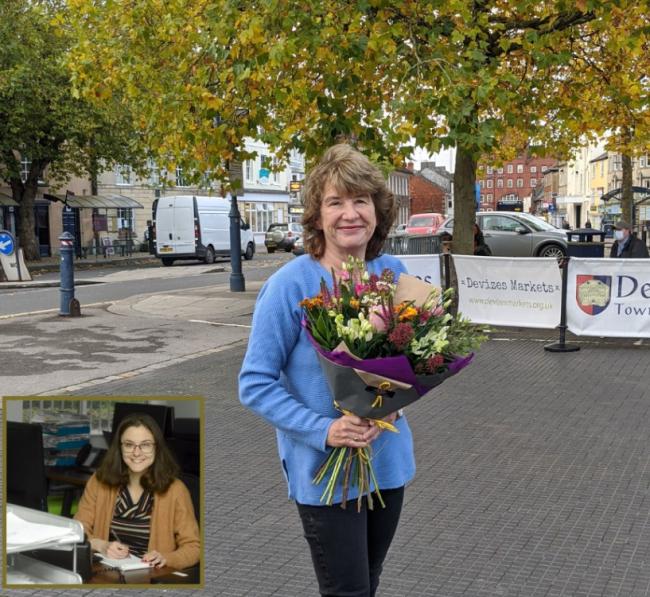 Joanne Moore with farewell flowers from her colleagues and, inset, Kirsten Robertson

Joanne told the Gazette & Herald: “I returned to the Gazette in 2014 to go back to where I started in journalism, covering a patch where I felt part of the community.

“Despite local papers undergoing a huge change over the past six years I have always felt privileged to cover the town of Devizes, which I have called home since 1986.

“I would like to thank the many people who have helped me over the years and the wonderful, vibrant and enthusiastic community which has provided me with plenty to write about.

“There is so much that I will miss but now is the right time for me to retire, finally having reached pensionable age, and enjoy Devizes from the other side of the notebook.”

Editor Pete Gavan added: “It’s always sad to say farewell to a long-serving member of staff, especially one who has put as much into making the Gazette the wonderful news source it is as Joanne has.

“We’re really sorry to see her go and wish her a long and happy retirement.”

Replacing Joanne in Devizes is Kirsten Robertson, 24, who joins the paper having trained on the Aberdeen Press and Journal.

Originally from Edinburgh, she will also be covering news in Corsham, Malmesbury and the surrounding area.