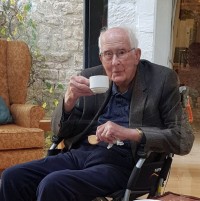 A former regional daily journalist has celebrated his 100th birthday.

Phillip ‘Pip’ Williams, who spent most of his working life as a sub-editor for the Bath Chronicle, marked the milestone on Saturday.

Pip, pictured, worked for the Chronicle before and after the Second World War.

He was based at the newspaper’s Radstock office until moving to Bath in 1973, where he remained until his retirement in the early 1980s.

A piece run by the Chronicle’s Reach plc sister website In Your Area reads: “His son, Nigel Williams, said even though his memory has deteriorated considerably, he loves it at the home and enjoys his food and the odd glass of red wine.

“Nigel and his wife visit him when we can, as does his daughter Judith.

“From everyone at the Bath Chronicle and In Your Area, happy 100th birthday Pip.”