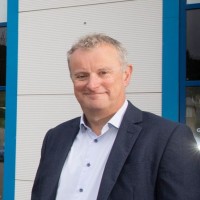 A former regional daily editor is retraining to become a counsellor and therapist.

Rob, pictured, edited the North Wales Daily Post for seven years and the Manchester Evening News for six before leaving the industry in 2018.

He later landed a role advising the Welsh government on infrastructure strategy, but has now made a further career change.

Rob is now making weekly calls to tenants of housing association Cartrefi Conwy who are struggling during the pandemic on a voluntary basis.

The 54-year-old, who lives in Conwy, told the Daily Post he wanted to “volunteer to do something to help” after the pandemic began.

He said: “It’s actually proved to be a very rewarding and fun-filled thing to do. It’s not just about ensuring vulnerable people have essential foods and medication it’s about offering a listening ear.

“It’s gone further though. I’ve never met some tenants face to face yet I now know them so well and count some as real friends.

“We share a lot about the Covid-19 health crisis but also talk about other concerns and fears.

Alun and Sylvia Roberts, from Llandudno, are among the people Rob calls each week.

Mr Roberts told the Post: “I was a bit taken aback when Rob first phoned but I grew to appreciate the fact he called every week, and still does, to see how things are and how we’re getting on.

“He has a lovely way about him and you couldn’t fail to be impressed. It’s like having a sibling to talk to, like a family member.

“I know when Rob rings I can talk in confidence and it won’t go any further. I can discuss problems or talk about my fears for Sylvia and our health with the pandemic and he will listen. Having Rob call to check on us and just be there for a chat has really helped.

“A call from Rob can last anything from five to 20 minutes. It’s never rushed. And he gave me his number so if I need to call him anytime for a chat if I need to. It’s a wonderful service that has given me a lot of confidence.”