Up to eight jobs are set to be lost after an independent publisher decided to close a six-edition weekly newspaper series.

HTFP understands Tindle Newspapers has permanently shut the Glamorgan Gem series after 37 years in business, with five editorial and three sales roles being made redundant in the process.

The Gem was last published in print in March, when it was suspended due to the coronavirus pandemic and all its staff put on furlough leave.

Vale of Glamorgan MP Alun Cairns had recently urged Tindle to reassure readers the series would return amid local rumours about its future. 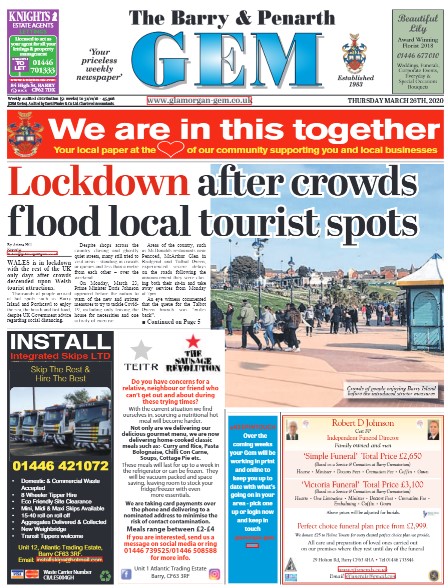 However, staff have now been told the title – which publishes editions covering Barry, Bridgend, Cowbridge, Llantwit Major, Penarth and Porthcawl – will close.

It is also understood the number of editorial staff working on Tindle title the Brecon & Radnor Express, which will remain open, is to be reduced by two.

A Gem staffer, who wished to remain anonymous, told HTFP: “I am gutted that Tindle have decided to close The Glamorgan Gem. I personally think it will be a huge loss for the area which has relied on it for local news.

“I’m still processing the fact I was made redundant yesterday. Tindle were reasonable in the consultations and I understand that the paper just wasn’t viable to run anymore, especially post-Covid.

“However, this was a career I worked so hard for, and especially with a lack of jobs going in the industry in Wales, I am fearful for my own career path at this time.

“I have started to accept that it could be the end of my chapter in journalism as I may have no other options within the industry.”

In a letter to Tindle’s South East Group Operations MD Scott Wood sent on 28 July, Mr Cairns wrote:  “Sadly, rumours have been circulating locally which suggest that the newspaper will not return following its temporary closure at the outset of the coronavirus pandemic.

“It’s remarkable that on the day of its release, you can go into a shop by the early afternoon and all of their copies of the newspaper are gone.”

Mr Cairns told HTFP: “The news that the Glamorgan Gem is due to close is a body blow to the Vale community.

“The Glamorgan Gem is what brings the community together so that everyone knows what’s going on. I’m determined to do everything to fight it and will leave no stone unturned.

“Also, if you’re an advertiser, please email Tindle Newspapers on head.office@tindlenews.co.uk to ensure that they know that you’re still keen to advertise in the Glamorgan Gem.”