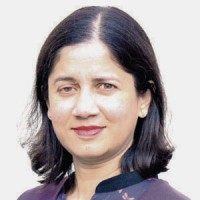 The BBC has announced Bradford-based Asian Sunday and London-based Eastern Eye have signed up to the local news partnerships scheme, which includes the local democracy reporting service employing around 150 journalists across the regional press.

The corporation revealed in April that news platforms which serve the UK’s black, Asian and minority ethnic population could apply to join the project.

Asian Sunday and Eastern Eye will now get access to stories created by local democracy reporters, as well as being able to make use of the BBC’s shared data unit and news hub.

Rithika Siddhartha, pictured, associate editor of the Eastern Eye, said: “With the BBC’s local democracy reporting service, we are pleased to supplement our unrivalled coverage of news that engages our readership – from local government to stories of national interest and also international affairs.

“The partnership with the BBC enhances Eastern Eye’s reportage of politics, business and local communities which are at the heart of British society.”

Stories already published by the Eastern Eye include a council warning about toxic body paints being sold at market, a councillor who has been receiving online abuse and the issue of public health funerals.

Ken MacQuarrie, director of Nations & Regions for the BBC, said: “Having BAME publications signed up to the LNP is a big step in ensuring important local stories are read, heard and seen by as many people in as many communities as possible.

“Newsrooms around the globe are having to do more with less, and I’m proud that Britain’s public broadcaster is doing its bit to help support public interest journalism.

“We’d like to encourage more publications aimed at BAME audiences to join. The benefits are clear, with hundreds of stories filed each week on councils, health bodies, police and crime commissioners and other authorities.”

The LNP is a partnership between the BBC, News Media Association and other media bodies.

Jeremy Clifford, chair of the NMA/BBC advisory panel and editor-in-chief of JPIMedia, said: “This is an important milestone for the partnership, ensuring that the local public interest journalism generated by the project will reach new audiences served by these publications.

“I am very pleased to welcome Eastern Eye and Asian Sunday to the local news partnerships.”