Westminster says it will keep publishing public health advertisements in regional newspapers across the UK after a rival proposal was put forward for Scottish titles by the devolved government in Holyrood.

The plan, revealed by Scottish First Minister Nicola Sturgeon’s chief of staff, comes after the UK government changed its official advice on dealing with coronavirus in England, with its headline slogan now urging the public to ‘Stay Alert’.

The Scottish National Party-led administration in Edinburgh has opted to retain the previous ‘Stay at Home’ message, creating a potential issue for papers in Scotland which are participating in Westminster’s current ‘All in, all together’ public information campaign.

Holyrood says it has approached Westminster to propose keeping the ‘Stay at Home’ message in Scottish papers, adding it will honour any bookings the UK government cancels in press titles therre. 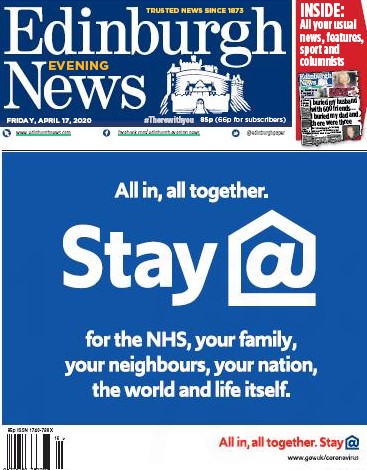 But Westminster chiefs have told HTFP they will continue to run the advertising scheme in Scotland, Wales and Northern Ireland “where it complements the positions of the devolved administrations”.

The three-month advertising partnership has seen the UK government publish public health messages in regional and national newspapers, but the latest move led to Edinburgh Evening News news editor Iain Pope questioning on Twitter how the divergence in strategies would affect public health advertising in Scotland.

Responding to Iain on Twitter, Ms Sturgeon’s chief of staff Elizabeth Lloyd told him: “We have proposed replacing any ads that [the UK goverment] have booked with Scottish public health messaging – so shouldn’t impact on the ad revenue at all.”

And speaking to HTFP, a Scottish government spokeswoman confirmed the plan.

She said: “We proposed to the UK government that we could provide alternative material deploying the ‘Stay at Home’ message for audiences in Scotland and we are in conversation with the Scottish press to be clear that we will honour any bookings the UK government cancels, if that is their decision.”

In response, a UK government spokeswoman said: “Although we have confronted this virus as one United Kingdom, it has spread at different rates across the country and the response needs to be flexible.

“We will continue to run UK government advertising where it complements the positions of the devolved administrations – for example on testing and symptoms.

“The UK government is supporting the devolved governments with testing, funding and logistical support from our armed forces.

“No one part of the UK could face this pandemic alone, and the UK Government has provided unprecedented support to every part of the UK.”

Scottish Newspaper Society director John McLellan told HTFP: “We’ve been in touch with the Scottish government and it’s really a political decision about how the two governments operate their health-related marketing campaigns.

“Scottish publications stand to receive a considerable amount of financial support through the UK government marketing initiative which they cannot afford to lose and we would be very concerned if this was put at risk.”