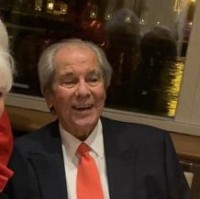 A former newspaper executive who served as managing director of a regional daily has died aged 83.

Philip Harris, pictured, held executive roles with a number of titles across the South of England, including the then Bath Evening Chronicle.

At the Chronicle, he served as chief executive and managing director – later taking over management of the Bridgewater Mercury and Somerset Standard.

He died in the Royal United Hospital, Bath, on Saturday 2 May.

Philip had seen action in Suez and Cyprus having joined the Parachute Regiment upon leaving school, before beginning his newspaper career with Westminster Press in the 1960s after leaving the British Army.

He worked first in Uxbridge before moving to the Bedford County Press in 1968, where he oversaw the installation and commission of a new, full colour, web-offset press.

In the process he became the youngest web offset manager in Europe, according to an obituary in the Wiltshire Times.

In 1977 Philip became chief executive and managing director of the Gravesend and Dartford Reporter and, after another spell in Uxbridge, he moved to the Trowbridge-based Wiltshire Times in 1983 before joining the Chronicle three years later.

After leaving the newspaper industry in 1994, Philip embarked on a new career in health service management in Bristol before retiring in 2011.

Philip had lived in Bradford on Avon with his wife, Esther, since 1984 and also leaves two children by a previous marriage and six grandchildren.

A private funeral is due to be held later this month at Bristol Memorial Woodland.