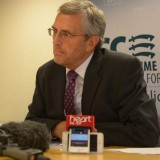 An ex-police chief has been called for journalists to be given easier access to data for which they must currently submit Freedom of Information requests.

Former Essex Police and Crime Commissioner Nick Alston has made the call in an interview with Archant investigations reporter Charles Thomson.

Mr Alston, pictured, has sympathised with the FoI battles faced by many journalists, saying they have to “jump through hoops” to get the answers they want.

His comments came after Essex Police announced it would reopen its probe into the so-called “Shoebury Sex Ring”, which was investigated by Charles for five years while he was working for the Basildon-based Yellow Advertiser.

Mr Alston previously worked with the YA when he was Essex PCC to investigate the case in 2016.

Speaking to Charles on Archant’s true crime podcast ‘Unfinished: Shoebury’s Lost Boys’, he said: “I think in this country, for a whole host of reasons, we have grown up with, in many areas, a default position of secrecy in government.

“At one stage in my career, I was seconded to the British embassy in Washington and you see that there are other ways of doing government. You can do government where you can ring up anybody and speak to anybody and you can get at data much more easily.

“Seeing the hoops that journalists have to jump through to get Freedom of Information requests and the bureaucracy around answering, it just seems to me to be largely wasted effort. A lot of of that data, it would be much better to see it in the public domain from the get-go.

“A lot of the stuff that’s hidden at the moment, I think, is hidden to avoid bureaucratic embarrassment – and that does worry me.

“Do I think the balance at the moment is wrong? I think unquestionably, in my view, yes.”